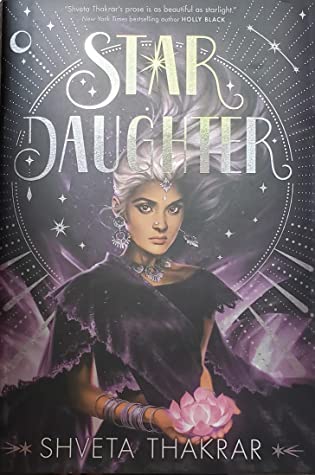 If the night sky holds many secrets, it holds Sheetal Mistry’s secret the closest. A secret that explains why her hair is the silver of starlight, or why some nights the stars call Sheetal by name.

Stars like her mother, who returned to her place in the constellation Pushya years ago. Since that day, Sheetal has been forced to hide.

But as her seventeenth birthday draws near, the pull from the sky is growing stronger. So strong that Sheetal loses control, and a flare of starfire burns her human father—an injury only a full star’s blood can heal.

Sheetal has no choice but to answer the starsong and ascend to the sky. But her celestial family has summoned her for a reason: to act as their human champion in a competition to decide the next ruling house of heavens.

Desperate to save her father, Sheetal agrees. But nothing could have prepared Sheetal to face the stars’ dark history—or the forces that are working to shut the gate between the realms for good.

I will admit, I loved the book cover from the moment I saw it. I am also obsessed with celestial things – so yeah. I am shallow, but all I knew was I wanted to read this book. I got the Owlcrate box, and the cover change was to my favorite color: purple. I was immensely pleased. The book also pleased me, since that is what I’m supposed to be talking about. I honestly don’t have many negative things to say about this book, in fact, it’s only really two things that I didn’t love, so I’ll go ahead and get it out of the way before I start talking about all the things I did love about the book.

The first thing was some of the pacing didn’t work for me. Especially when it was parts surrounding the competition. I felt it was a bit awkward, but it was definitely no deal breaker for me. Most of the pacing, probably around 80%, really did work for me.

The second thing was the romance. I think I would have liked this book even more if it had lacked the romance, because it was so powerful in other parts. In other words, I was fine with it, but didn’t find it overly necessary.

Now, onto the good. As I said, this book had some great and powerful moments, mostly revolving around friendship and family. I loved the aspects of that in this book. I love books that focus on moments between friends and family, and this book does it really well. It juxtaposes the different types of familial relationships and uses a fantasy setting to draw out drama and how families can be complex as well as good and bad. I definitely enjoyed some of those parts, especially as Sheetal learns more about herself and her relationship with her family members. As far as friends go, we do have a good friendship. I would love to have seen more of it, but what we do get is amazing and lovely and I adored it.

I also really loved the writing in this book. It was beautiful and left me smiling. While I read this book I never once felt that there was an imbalance of prose to dialogue or anything of that nature. In fact, I felt that it was wonderfully composed and enjoyed reading every minute of it.

I definitely think there was a plot, but I think the plot was really meant as a device for a more character driven story. But the plot was consistent and whole. The plot worked well into the theme of the book, and it wasn’t so big it felt the book was too short, but not so small that it felt drawn out. There was a good balance.

And clearly, I loved all the celestial parts of this book.

This book was amazing and I highly recommend it!