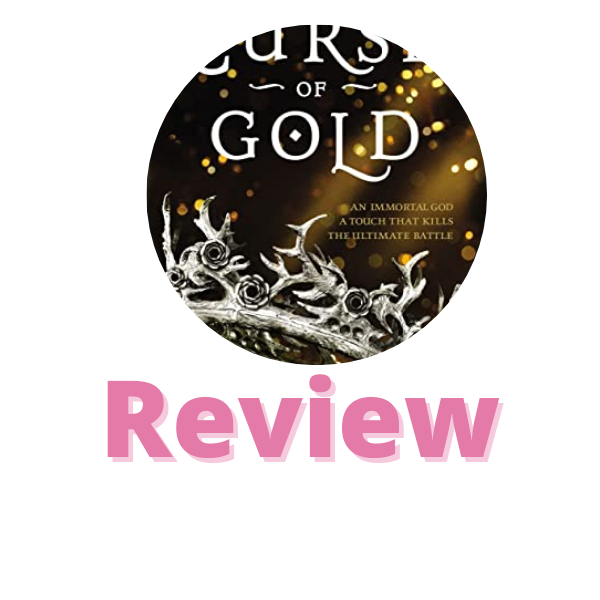 A Curse of Gold

After barely surviving thieving, bloodthirsty pirates and a harrowing quest at sea to retrieve her stolen treasure, Kora finds readjusting to palace life just as deadly. Kora’s people openly turn against her, threatening her overthrow as heir to the throne—a cursed queen who has angered Dionysus. When Dionysus puts out a challenge to kill the girl with the golden touch and burn down her kingdom, it’s not just her future on the throne in danger. Kora’s life and entire kingdom are now on contract.

As bold and brave as ever, Kora sets out to find Dionysus, the very person who is trying to kill her, on the mysterious disappearing island of Jipper. Kora has no other choice. If she wants to save her kingdom and have any chance at reversing her father’s curse, she will have to enter into a deadly game with Dionysus, the greatest trickster the world, or the underworld, has ever seen.

Thank you to NetGalley and the publisher for a copy of the e-arc in exchange for an honest review.

So, I enjoyed the first book. I love seeing different takes on mythology, and this one was definitely interesting! I hadn’t seen it done that way before, and I was intrigued. Of course, I picked up the sequel (this one) before I’d read the first, so I had to read that first. This is the sequel to A Touch of Gold and I think it is a good sequel.

The Writing
I like Sullivan’s writing. I liked it in the first one, and I liked it in this one. There is something easy about it, and it isn’t harsh to read. Partially I think that’s because the writing flows very nicely. Do I wish that some of it read differently? Maybe, but overall I liked it.

The Pacing
The pacing in this book felt a bit weird to me. I’m not sure why, but it didn’t stick with me, and I wasn’t enjoying the pacing as much as I did in the first one. I feel that there may have been too much going on in this one? Too much ground trying to be covered and therefore the pacing was off? There was also the push to each plot point rather quickly. I wasn’t as enamored with it.

The Plot
The plot certainly was interesting. I didn’t like it as much as the first, although I enjoyed Kora in her position as feeling she was rightfully a princess. I liked those portions, and I liked seeing her developing relationships. Those were all positive plot points for me. I liked the take on the gods, especially the Oracle and Dionysus. There is a lot happening in this plot even though it is driving towards one end, and there isn’t too much “side quest” action going on.

The Characters
I still like Kora and Royce as characters. I think there is something to be said for enemies to lovers, and they feel like they had that rapport and good communication. I just love how Royce stands by her side and is always encouraging. Although sometimes I felt it was a bit not well written in terms of romance, overall, I really enjoyed the character development in this book for these characters. Another thing I enjoyed about this book is the relationship was strong, and we don’t get many divisive moments between the two of them.

Triton is an interesting character that was added, and he has a strong personality. I enjoyed the other returning characters as well. I felt overall there wasn’t as strong a rapport between all the characters as there was in the first book.

The Worldbuilding
Of course, this doesn’t feel like a historical Greek world. This feels more like something out of a myth, which this is based on. I like the take on the gods, and I think it is well done. There doesn’t need to be a lot of worldbuilding for it to work well, and it does.

Overall
It was an enjoyable book. A solid three stars from me, and mostly because I love interesting takes on myths, and this gave me that!