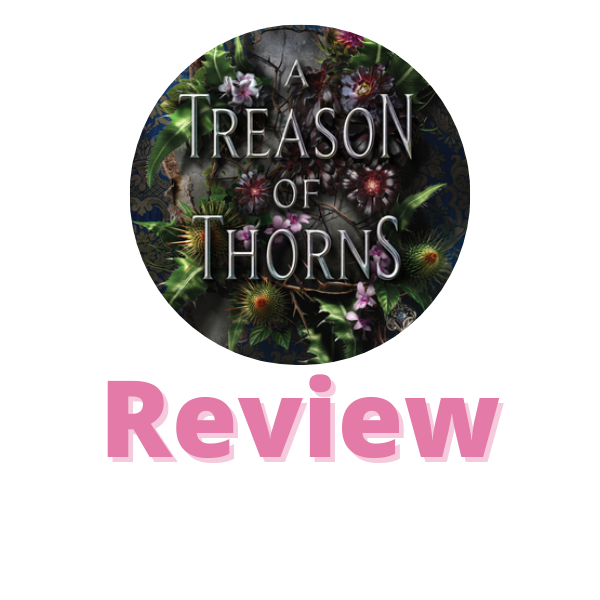 A Treason of Thorns

Violet Sterling has spent the last seven years in exile, longing to return to Burleigh House. One of the six great houses of England, Burleigh’s magic kept both the countryside and Violet happy.

That is, until her father’s treason destroyed everything.

Now she’s been given a chance to return home. But Burleigh isn’t what she remembered. Wild with grief, Burleigh’s very soul is crying out in pain. As its tormented magic ravages the countryside, Vi must decide how far she’s willing to go to save her house—before her house destroys everything she’s ever known.

A house left unchecked will lead to ruin.

But I will not let it ruin me.

I was parsing my feelings all night about this book. I remember several people I knew didn’t like this book, and I hesitated so much going into it. I was worried I wasn’t going to like it at all. In the end, I’m glad I give books a chance, even if I think I won’t like them. There is just something wonderful about this book that I really enjoyed. And I can’t even give a full explanation as to why. Something about it just stuck with me, because I am still thinking about it this morning. And it was one book I wasn’t even tempted to skim.

It was inevitable, but so far in life, ignoring the inevitable has always been easy for me.

This book drew me in from the very first. I loved the idea, and I loved the mix of our world and fantasy. And perhaps that is one reason that I found I had no trouble with it, this didn’t require a whole new world type of world building, but it did require a magic system. And I think this book benefitted greatly from that. It was a great magic system and I was so intrigued by it. In some ways I would have loved more content based on the end, and what happens after in terms of consequences, but I’ll take what I can get.

What was also a relief was this book was a standalone! I have recently learned how much I love standalone fantasy books. A whole lot. Because there is nothing wrong with them! And this worked so well. I mean, this author could do a prequel or even a sequel if they so desired. Not that they will, but this world had such amazing potential.

I was wowed! Also old houses? Yes. There is definitely ancient magic about them. Something special, and I guess this book played on my feelings about that. And so I liked it.

Blood and mortar, I miss it with everything in me.

I even liked the characters. Vi is so determined to be Caretaker – she doesn’t care what she has to do. She will do whatever it takes, even begging the King who killed her father. But her friend Wyn isn’t so sure. I loved Vi’s character arc so much. She grows and learns from herself and her mistakes. And really cool things are revealed in this book that I am not going to mention here. I just enjoyed the plot a whole lot. There were some interesting turning points that made me gasp.

I hope it helps, that I send my voice to him when I can.

I also like Wyn. He’s pretty much your typical mysterious character, and what does he have to do with anything? And so on.

I will mention there is romance in this book, but it doesn’t happen until much later, and I like its development. I was pleased with the way the author did things.

The pacing was also good for me. I didn’t feel like I was missing things, or anything was going too fast. In fact, I rather enjoyed taking my time with it. I never got to the point that I was desperate to finish it so I could move on. A good sign of nice pacing.

And finally, I did love the writing. I thought the writing was lovely, and it worked well with the book.

Definitely a four star book for me!