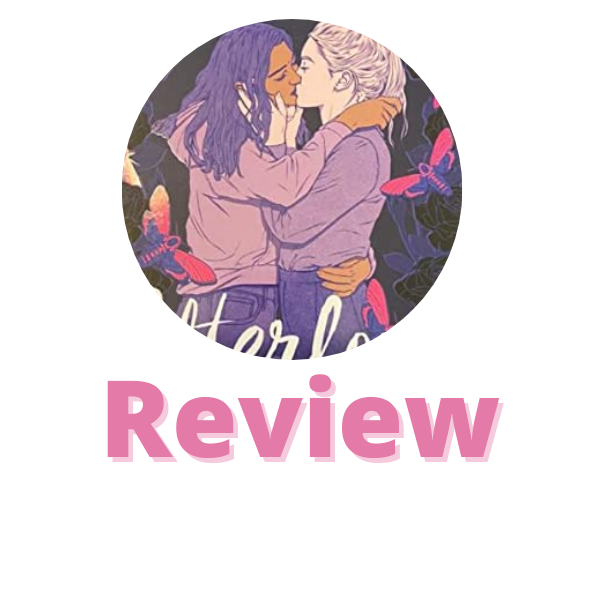 Ash Persaud is about to become a reaper in the afterlife, but she is determined to see her first love Poppy Morgan again, the only thing that separates them is death.

The last thing Ash hears is the snap of breaking glass as the windscreen hits her and breaks into a million pieces like stars.

But she made it, she’s still here. Or is she?

This New Year’s Eve, Ash is gets an RSVP from the afterlife she can’t decline: to join a clan of fierce girl reapers who take the souls of the city’s dead to await their fate.

But Ash can’t forget her first love, Poppy, and she will do anything to see her again… even if it means they only get a few more days together. Dead or alive…

NOT EVEN DEATH CAN TEAR THEM APART.

First off, I am prefacing this with I got this book in Fairyloot’s August 2021 box – Lovestruck. Mind you, I haven’t enjoyed YA contemporary in some time. It just hasn’t hit me in the right way that it does for others. Not that it isn’t good, a lot of it is, but generally isn’t for me. Saying that, I felt obligated to read this book as it came in my box. I hadn’t heard of this (but now that I’ve read it, I’m seeing it everywhere!) so I went into this with pretty much no knowledge of anything. That is totally on me. Word to the wise: read book summaries before starting books.

The reason I say that is this book was definitely something I probably shouldn’t have read given my mental health. My mental health isn’t the best recently and between my severe depression, my anxiety and everything else, this isn’t a book I would have read had I looked at the summary. I don’t regret reading the book, because it was fantastic, and I am going to recommend it to people everywhere. However, it needs to have a caveat that the subject matter it does deal with is really dark and is best suited to people who are equipped to deal with it.

This book is all about friendship, family and romance. The book starts off with an absolutely compelling relationship between mother and daughter, Ash who is our main character. Starting this book was very feel-good. You also get a great friendship story with Ash as well. Her blooming romance with Poppy is unbearably sweet (in a good way) that makes you smile. So does her relationship with her mother, father and sister. It just felt so real the way it was depicted. It felt natural, and Byrne did an excellent job fleshing out those relationships.

Of course the second half of the book is where it all went sideways. Ash (AND THIS IS IN THE BOOK DESCRITPION AND I MISSED IT) DIES. Literally…just dies. I was traumatized when I read that part. I 100% had tears streaming down my face and I couldn’t breathe. I just fell apart. I don’t cry all that often at books (except maybe Song of Achilles, the other book that ripped my heart out) but this one made me cry. And part of that is because of how well developed all the relationships in this book were!

[spoiler]Poppy dies too. I also cried when Ash goes back to her house and sees her family through the window…and just that whole moment was so powerful I ended up sobbing again[/spoiler]

I will admit that I didn’t enjoy the second half of the book as much as the first half. I felt part of the second half could have been slightly reduced as that section felt a bit repetitive to me. This is why I gave it 4 stars instead of 5.

The ending of the book was happy? Bittersweet?? I really don’t know how to label the ending of the book because by that point I was in shock and in tears and I was barely functioning at 10pm. So yes, I liked the ending, I will say that. It felt like a mostly natural conclusion to the story. I just still don’t know how to feel about it overall. I did really like it though.

[spoiler]I mean they both died and went off into the sunset together so…you know…I guess that’s happy? But bittersweet because they both died?[/spoiler]

This was a great sapphic love story for a YA audience, albeit it was sad.