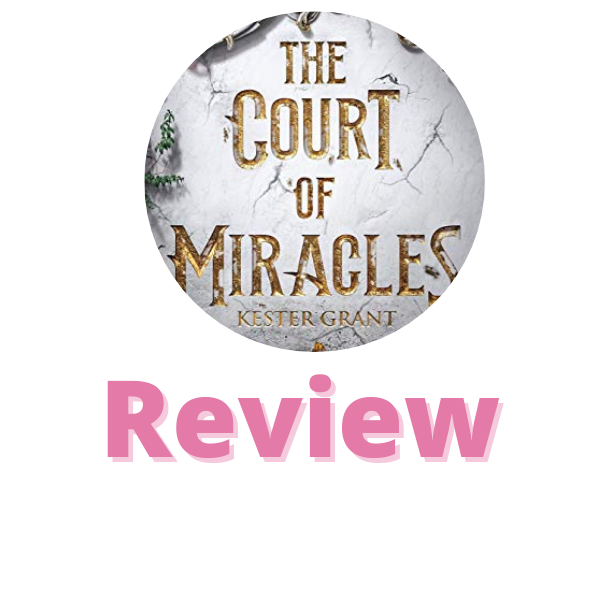 In the violent urban jungle of an alternate 1828 Paris, the French Revolution has failed and the city is divided between merciless royalty and nine underworld criminal guilds, known as the Court of Miracles. Eponine (Nina) Thénardier is a talented cat burglar and member of the Thieves Guild. Nina’s life is midnight robberies, avoiding her father’s fists, and watching over her naïve adopted sister, Cosette (Ettie). When Ettie attracts the eye of the Tiger–the ruthless lord of the Guild of Flesh–Nina is caught in a desperate race to keep the younger girl safe. Her vow takes her from the city’s dark underbelly to the glittering court of Louis XVII. And it also forces Nina to make a terrible choice–protect Ettie and set off a brutal war between the guilds, or forever lose her sister to the Tiger.

Thank you to NetGalley and Knopf Children’s for an e-arc of this review in exchange for an honest opinion.

I hemmed and hawed about what I was going to rate this book, because I wasn’t sure at all what I thought it should be, but in the end I settled on three stars. There were several reasons why, and I think it needs to be broken down into pieces to explain why I struggled so much with this book. This is not to say I didn’t enjoy the book, I did overall. I liked Nina a whole lot, and I was cheering her on the whole while, and yet…

First off, I don’t know what Les Mis is outside of memes and other references. I have never read or seen it. I essentially had no basis for this, and I think that partly played into my issue with this. Such as I recognized names, but they meant nothing outside of the book to me, and that in and of itself made the book hard to understand. Without the context, I felt some of the characters were left dangling, because to know and/or understand them, you had to know the original characters. And I didn’t.

The Writing
I really liked Kester’s writing. I thought it was lovely, and I liked reading it. I didn’t think that it was overly jarring one way or the other. I think the prose worked really well for me overall, and I enjoyed the dialogue.

The Pacing
The pacing I didn’t love. Skipping time, scenes…it just wasn’t working for me. I think it had so much potential but we would get really fast parts and then really slow parts…and it felt messy to me somewhat. Overall, I was left a bit dizzy.

The Plot
I was confused. I’m going to be honest, as I’m writing this review, this book was clearly out of my wheelhouse. The concept seemed so interesting, but I felt like you needed a degree in Les Mis to understand it. I didn’t know that at the time, and I wished I had. I feel that so much of the plot was related to the original work…and I didn’t understand it. I got the concepts overall, and what was going on. I liked bits and pieces overall, but I struggled through parts of the plot.

The Characters
Nina, Ettie, and like two other characters are the only ones that stuck with me. So many characters, and slightly hard to tell them apart. Not only that, some of the characters as I mentioned earlier were clearly related to Les Mis and I knew the names…but not what purpose they served. I don’t know, I liked Nina best. She was one of my favorites, and I liked her strength, but overall, I just didn’t love any of them. Most of them fell rather flat, but this was an enormous cast.

The World building
As an alternate Paris, I think it was really creative. Taking history and mixing it with Les Mis and other portions could have turned out really well. And I think it was atmospheric, and well described.

Overall
I enjoyed the book, but I think this one just wasn’t totally for me. I think if you like French history, Les Mis or anything like that, you’ll like this.
HOWEVER, advertised like Six of Crows? It sort of is, but not really.