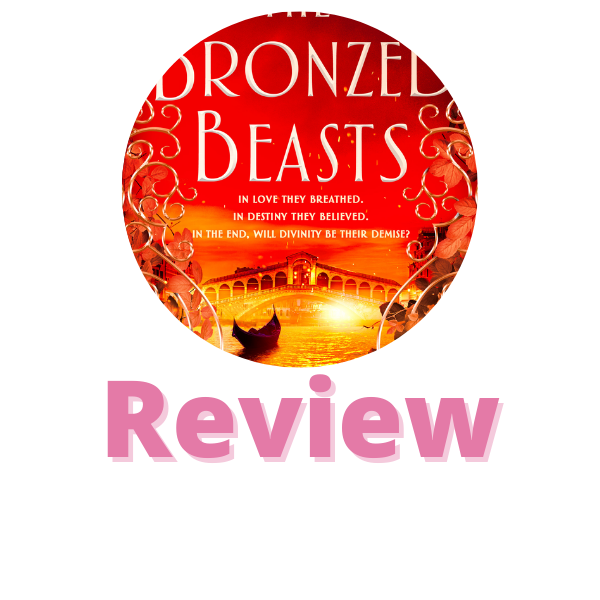 In love they breathed. In destiny they believed. In the end, will divinity be their demise?

After Séverin’s seeming betrayal, the crew is fractured. Armed with only a handful of hints, Enrique, Laila, Hypnos and Zofia must find their way through the snarled, haunted waterways of Venice, Italy to locate Séverin.

Meanwhile, Séverin must balance the deranged whims of the Patriarch of the Fallen House and discover the location of a temple beneath a plague island where the Divine Lyre can be played and all that he desires will come to pass.

With only ten days until Laila expires, the crew will face plague pits and deadly masquerades, unearthly songs and the shining steps of a temple whose powers might offer divinity itself… but at a price they may not be willing to pay.

No one is more devastated than me – because I gave the first two books five stars. I LOVED this series. I’m a little upset that I am only giving this book 3.5 stars. If you want to know why, please read on!

I want to cover what I enjoyed about the book first. Because there were aspects of the book that were enjoyable. Chokshi is a talented writer. I’ve loved everything that she has written, and the writing in this is no exception. I thought it was fabulous. Chokshi has a way with words and they melt into your brain as you are reading.

Another aspect I liked is that this is historical fantasy, and I found it well done. Much like the first two books there were lots of puzzles and action in this book.

The characters are another facet that Chokshi is a master at. She is able to craft characters that are so wonderful and feel as if they can step off the page. I did enjoy the overall character arcs in this book for the most part.

The major thing that brought this book down was I felt that this was just a repeat of events in a slightly different way from the first two books. It felt rather repetitive. And while I do think the characters had depth, I didn’t feel that they were as well done as in the previous books. I also would have liked more from Hypnos character. He was a side character, but he also was a main character? Honestly, that was a little confusing.

To be honest I was going, plot, what plot? Throughout this entire book. I felt that this book drifted around a lot, with no true purpose. It didn’t feel as if it was for character development either. I’m not sure what happened here, but it was not nearly as good as the first book was. The pacing was awkward for me too, and I felt that I was bored – and I was SO SAD because I wasn’t bored in the previous two books. I’m really not sure what happened with this book. It just didn’t work as well.

I did however, love the ending. I was pretty happy with it. I knew it was going to be bittersweet, and it was in multiple ways. But I loved where all the characters ended up, especially my faves, Zofia, Enrique and Hypnos.

Overall, the book was good, it just wasn’t as good as the first two books. I am excited to read whatever Chokshi writes next!

One thought on “The Bronzed Beasts”