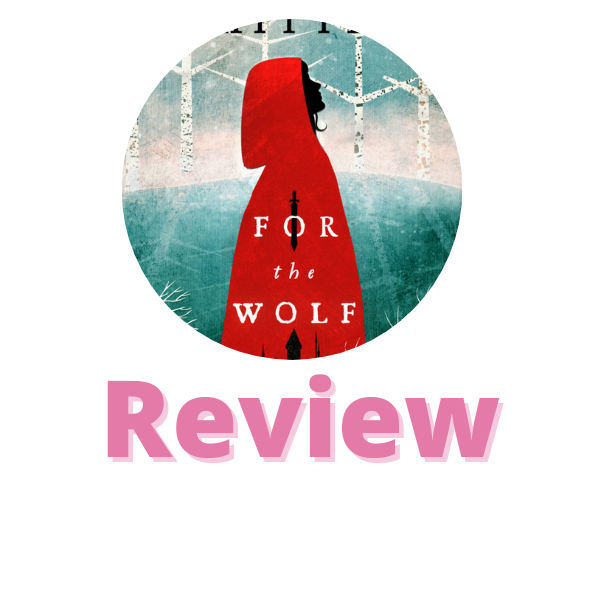 As the only Second Daughter born in centuries, Red has one purpose-to be sacrificed to the Wolf in the Wood in the hope he’ll return the world’s captured gods.

Red is almost relieved to go. Plagued by a dangerous power she can’t control, at least she knows that in the Wilderwood, she can’t hurt those she loves. Again.

But the legends lie. The Wolf is a man, not a monster. Her magic is a calling, not a curse. And if she doesn’t learn how to use it, the monsters the gods have become will swallow the Wilderwood-and her world-whole.

I absolutely adored For the Wolf. Books that have mysterious forests and creatures set in a fantasy world? Y e p. I love it. Those are some of my favorite things, and this book contained them! Therefore, it was a given that I would like this book. And did I! I was a bit hesitant at first, and I don’t know why – maybe I was worried it wasn’t going to live up to my expectations, but it did! (I mean, I’ve been fooled by covers before, and I love this one, so I’m right to be worried, I swear.)

World building in this book was done well. Whitten has created such a lovely and complex world and I just wanted to know more about it. Because some of the events mentioned in the book take place in the past we don’t know the full story. So as Red learns it, we do as well. This is one of my favorite ways for fantasy books to do reveals, and that is how it is done in this book. The world felt so real to me, and I liked how divided the world felt, and I think that was intentional.

The atmosphere! How lovely the atmosphere in this book. I could just imagine what it looked like, and how it felt, Whitten evoked such a sense of place and atmosphere with her writing. I was fully immersed in this book as I read it, and I read it quickly too. I just could not put it down! All that to say her writing is great as well. It flowed easily and worked well. I didn’t feel that it bogged down anywhere.

The pacing was also wonderful in this book. I didn’t get bored!

The side characters in this book really livened things up as well – and brought new POVs to situations that we didn’t realize were happening.

Red and Eammon were both wonderful. I loved as they began to learn about each other and trust one another. As a romance develops between them you can’t help but smile. As dark as this book was at times, it also held a bit of light and hope.

The other relationship was between Neve and Red, the sisters, and that was skillfully executed as well. I was honestly so impressed with it — I love when we get well done family relationships.

This book has become one of my favorite adult fantasies, and when I first read it I gave it four stars, but I think I’m going to change it to five, thinking back.