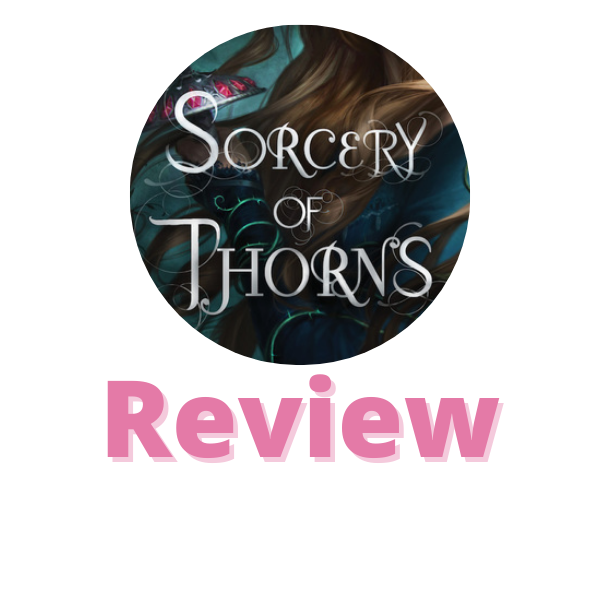 All sorcerers are evil. Elisabeth has known that as long as she has known anything. Raised as a foundling in one of Austermeer’s Great Libraries, Elisabeth has grown up among the tools of sorcery—magical grimoires that whisper on shelves and rattle beneath iron chains. If provoked, they transform into grotesque monsters of ink and leather. She hopes to become a warden, charged with protecting the kingdom from their power.

Then an act of sabotage releases the library’s most dangerous grimoire. Elisabeth’s desperate intervention implicates her in the crime, and she is torn from her home to face justice in the capital. With no one to turn to but her sworn enemy, the sorcerer Nathaniel Thorn, and his mysterious demonic servant, she finds herself entangled in a centuries-old conspiracy. Not only could the Great Libraries go up in flames, but the world along with them.

As her alliance with Nathaniel grows stronger, Elisabeth starts to question everything she’s been taught—about sorcerers, about the libraries she loves, even about herself. For Elisabeth has a power she has never guessed, and a future she could never have imagined.

I’ve been waiting forever to read this book. It had libraries, demons, magic and what have you. It seems like it would be the perfect book for me, so I was very excited to start reading it. But, at the same time I was worried that it was going to fall short of my expectations. That’s always the fear with books that are hyped up — that they aren’t as good as you think they’re going to be.

That is why I am so pleased to say this book went above and beyond my expectations. I was really impressed with Rogerson’s writing in An Enchantment of Ravens, and was still just as impressed with the writing in this book. I think there is something about her style that I adore. The way it flows, the way her sentences are crafted…there’s something about it that I enjoy and makes the books just fly by! I didn’t want to stop reading it!

As far as plots go, this got more convoluted the longer the book went on. You weren’t quite sure where it was going to go, where was it going to end? You never know! I did enjoy the plot and the subplots that ran through because Rogerson managed to link the subplots into the main plot as well, which I appreciated. I like it when everything ties in and wraps up. As far as the romance plot, I didn’t hate it. Parts even made me grin. So yes, I even enjoyed the romance in this one. Yay!

Elisabeth and Nathaniel were the main characters in this book, but Silas also played a part. Elisabeth was definitely the most fleshed out character and she absolutely shone. She made this book absolutely engaging! I was really enthralled with her character. The other characters were done really well, even if they were secondary or the villains, and while they might not have been as fleshed out, they were still good.

The only thing that disappointed me was the ending — simply because I felt it was too rushed (I still gave this book five stars though) for all the great plotting and ramping up we got earlier no. There was one part at the end I REALLY REALLY liked and I would love to see a sequel to this book, even if it isn’t focused on Elisabeth. I think this was a fascinating world Rogerson created.

I will definitely be picking up other books by this author as she publishes, because I’ve loved both of them so far.